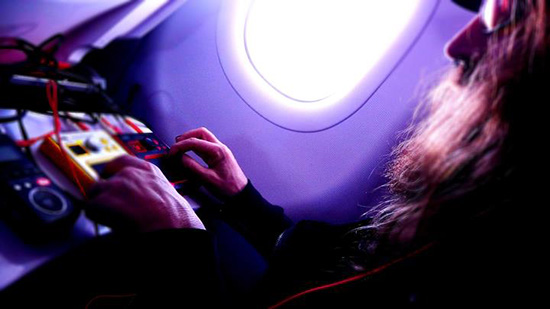 Ted Vasin is a San Francisco-based artist who works in painting and sound. His work attacks the phenomenon of the psychological spectrum and its possibilities of expansion and transcendence. On the canvas a collision of hyper-realism and technologically produced abstractions proposes an intersection where the organic self and the physical world must come to terms. Vasin's work is vulnerable and visceral often relying on the grotesque in an attempt to encapsulate a moment and fuse it with the mind; there are toilets, phalli and insects all rendered with the reverence of a 17th century Dutch still life painter. This imagery along with self portraits and iconic pop culture objects offer the viewer something familiar, a point of entry into the picture and down the rabbit hole--asking for and often provoking participation in the shared sensory perception of the human experience. While the artworks are a place for connection, they are also a visual anthology with a recurring index of computer generated forms plucked from the artist's imagination, concurrently questioning and reaffirming the idea of an archetypal universe. The artist's own body often becomes a frame of reference for a sentient existence--the intersection of its limitations (mortality), and its abilities (creation) are starting points in the artist's practice and its continual attempt to transcribe and chronicle the depths and boundaries of consciousness.

Born and educated in Moscow, Vasin has exhibited for nearly two decades both internationally and statewide including shows at the 101/exhibit, Limm Art Gallery, Davis Art Center, artMRKT Hamptons, Frey Norris Gallery, Tarryn Teresa Gallery, Sotheby's New York, Tel Aviv and Amsterdam, Stanford Art Spaces and more. He was an artist-in-residence at the Fine Arts Museums of San Francisco, exhibiting at the Palace of the Legion of Honor and the De Young Art Center. In 2006 Vasin was a recipient of the Pollock-Krasner Foundation Grant. His work has been reviewed by the ArtWeek, San Francisco Chronicle, ArtSlant and has been featured in Hi-Fructose Magazine, American Art Collector, New American Paintings, Fashion Week Magazine, Wired Magazine as well as online in Juxtapoz, and Beautiful/Decay.

Susan Williamson, "What To Wear To Wynwood's Hottest Galleries" Refinery29, May 24, 2012

"Must See Paintins Shows: May" New American Paintings blog, May 3, 2012

"The illustrations by Ted Vasin" Design You Trust, April 2012

"The Latest from Ted Vasin" in Juxtapoz, September, 2010

Jackson Yan, "Speaking Through Art" in The California Aggie, 2008

Erie Vitiello, "Sound, Art will share the vibe", in The Davis Enterprize, June, 2008