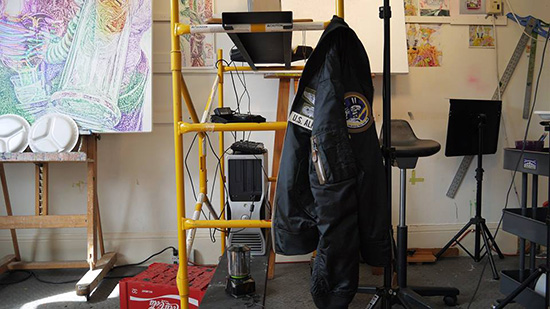 Ted Vasin's recent self-portraits focus on the expressive depiction of otherworldly states of consciousness, and by doing so, they take an honorable place in the long tradition of images devoted to ecstatic revelation. But Vasin's paintings also step away from that tradition in that they are not in any way inspired by religious fervor. Instead of saintly visions delivered from theological mountain tops, Vasin's works take experiences with psychoactive substances as their points of inspirational departure, which are conveyed to the viewer as extreme feats of imagination, the things imagined being nothing less than the rupturing of the liminal threshold between consolidated matter and diffused energy.

This threshold is Vasin's great subject, the goal of which is the envisioning the existence of alternative realms of experience that stand far apart from ordinary reality. For example, in the work titled K-hole, we see a moment that looks like the immediate aftermath of a full-out psychotic break. It takes place in a bathroom facility that, by virtue of handrails placed on either side of the toilet, seems designed for an orthopedically challenged user. But in this work, it is the artist who is that would-be user, and his challenges are decidedly non-orthopedic. Inside the toilet bowl, we see the remnants of a yellow happy face logo contorted into a grotesque grimace, with sharp arrows popping out of its eyes. Nearby is another more conventionally configured smiley face, complimented by various stickers affixed to the tiled walls one proclaiming "Fuck" in backwardly mirrored letters, another "Elvis" and still another the ubiquitous "My Name Is.". To judge from the knot of colored tendrils spilling out of the bowl, we are witness to the aftermath of a spectacular purge of physical and psychical toxins, all made enigmatic by a sextet of floating nipple forms that seem to represent some form of benevolent salvation. In the slang parlance of recreational users of ketamine, a K-hole refers to a disassociate state that mimics catatonic schizophrenia, earmarked by extreme states of disassociation. Vasin's painting of the same name may have recreated what one of those states might feel like.

Although K-hole could be reflective of an experience with ketamine, Vasin has said that some of the other paintings are informed by experiences with DMT, which is the most potent and revelatory of psychoactive agents. DMT is much more powerful than psilocybin or LSD, yet this fact is not nearly as significant as is the qualitative difference between the effect that it produces and those engendered by those others substances. DMT prompts outright visions of an otherworldly character that reach beyond mere elation and hallucination, and these often take the form of fantastical quasi-volumetric creatures zooming about in stroboscopic multi-dimensional spaces. Oftentimes, it also prompts painful moments of harrowing self-confrontation that come part-and-parcel with the shattering of self-illusions, sometimes going so far as to induce highly elaborated visualizations of one's own death, or even the death of the world revealed in horrifyingly vivid detail. Other reports point to encounters with divine or alien entities that offer benevolent guidance taking the form of transcendental visions.

One work by Vasin titled Eat Shit and Die can be seen as a residue of the former kind of experience. It is a relatively conventional self-portrait of the artist wearing aviator-style sunglasses, looking at the viewer while appearing to be lying on a floor, his body resembling that of a blue bee that, in this guise, partially engulfed in a viscous golden liquid that seems to pour out from him. Strewn around his neck are several Iron Crosses of the type that rewarded German military achievement during World War II, here re-appropriated to represent the dubious fruits of artworld success, casting the successful artist as the one who throws the most delightful of rose buds upon the cultural carpet upon which the most mendacious of demagogues will tread. There are ants partially covering the figure, all taking their turn in devouring the impassive artist's golden essence. Here we can see the figure of the artist as a representation of unique originality, and the ants as the minions of mechanical duplication.

The imagery of Device Improve features a begoggled face clad in leather capped high-altitude oxygen mask of an old Soviet-era aviator, which is centrally depicted in the painting, staring across at the viewer with reflected mandalas visible in the eyes. The breathing device probably implies "flying high," and traveling at an extreme velocity, suggesting that the viewer is being invited to come along for an exhilarating ride. In one hand, the pilot holds a cigarette lighter, while the other holds a transparent tubular object that resembles a water pipe connected to the oxygen mask. Inside the pipe, we see a knot of iridescent spirals that suggest that what ever is about to be smoked has a magical and potentially transformative power. This may refer to some kind of psychoactive substance, but it may also suggest that the physical character of the painting itself might be the instrument of such a transformation.

The surfaces of these paintings convey a vibrant luminosity that defies precise verbal description, and much is missed when they are reproduced on the printed page or the pixelated screen. In most instances, these works seem simultaneously illuminated from within and without, and from beyond as well, owing to the painstaking technique of applying multiple layers of interference acrylic paint. Just as Flemish artists such as Jan Van Eyck learned to use layers of glazed oil paint to amplify the painterly capture of light, so too do Vasin's canvases reveal a similar method for layering acrylic paint, with each subsequent layer modifying the color of the one beneath it, creating an efflorescent luminism. These additions expand the conventional associations that viewers might make between a painting's color content and the way that colors transform into different illusions of light whose hues and saturations shift as the viewer walks past and around the works.

For Vasin, it is not enough to simply imagine and illustratively describe a speculative possibility; rather, it is imperative that such possibilities be energized and animated by the kind of radiant illumination that is uniquely inherent in the painter's art. It comes in two distinct forms, both of which are synthesized in Vasin's paintings. The old distinction between Lux and Lumina applies here. Respectively, they are the Latin words for the type of light that bathes the outward topography of a sumptuous form, and the kind of light that emanates from within a form. The former connotes worldly luxury, while the latter bespeaks radiant illumination and spiritual aspiration. But Vasin's synthesis of sacred and profane illumination is only a gateway to a deeper meaning that communicates on the level of bodily affect. The work communicates with its viewers on that level by presenting analogies between the layered process of their own becoming and that of the body's process of growth and acquisition of experience, including those that stretch the boundaries of consciousness. This is why the work looks generated rather than merely formulated, which in turn is the reason why it looks uncannily alive.

This process of generation involves more than just the methodical layering of translucent pigment. Amid those layerings, there also a coordination of the subtleties of shock, seduction and the worldly recognition that affective understanding is a more complex, complete and satisfying phenomenon than is mere cognition, which oftentimes looks and then looks away before any real seeing takes place. This greater level of complexity is what makes any aesthetic object different from other objects; it lives at the intersections of logic, sensation, and desire, rather than the more commonplace locations of functionality and informational description. This is what Vasin's paintings accomplish, even as the logics, sensations, and desires that are embedded within them are rooted in the outer thresholds of extreme states of mind.

With regard to this point, it should also be noted that, in addition to being a painter, Vasin is also a sound artist who creates experimental electronic sounds with layered fragments taken from news reports and random word generators. These are the soundtracks for Vasin's painterly visions. Like the paintings, they too are complexly layered experiences that echo the artist's adventures with psychoactive substances, and they do this by way of making synesthetic analogies between sonic vibration and painterly illumination. As such, they both echo Wassily Kandinsky's notion that the key to both painting and music resided in the idea of the spiritual Klang, or vibration, which was said to function like a spiritual tuning fork for the human sensorium. The paintings and the sound installations both accomplish this in their own way, creating synesthetic mirrors for each other's forays into extraordinary states of being.