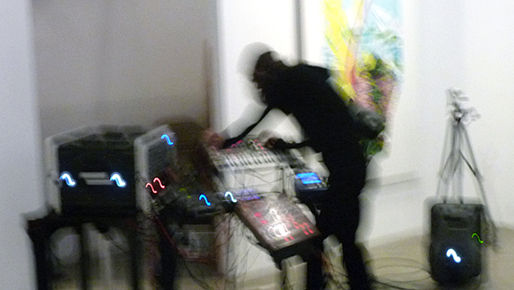 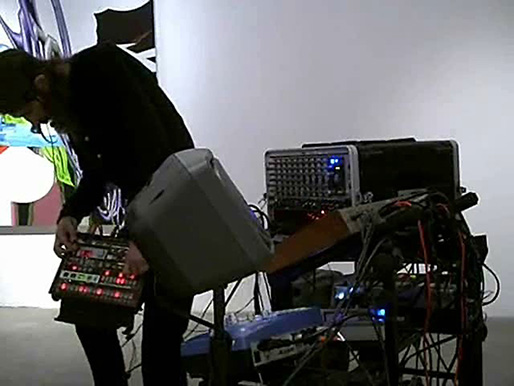 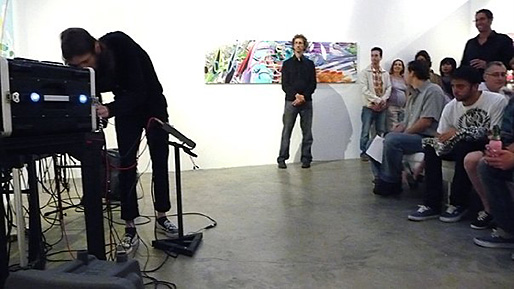 Tarryn Teresa Gallery is pleased to present Non-Local Cues, a solo exhibition of paintings by San Francisco-based artist, Ted Vasin. In this exhibit, Vasin presents a selection of work curated to reflect the theme of 'non-local cues' found throughout his entire body of work to date. The exhibition will be accompanied by a live sound performance on the opening night of the exhibition.

For Vasin, painting is his primary way of communication. He attempts to do this through a created 'language' that could be perceived as pre-cognitive. Inspired by dreams or half-awake reveries, Vasin uses these visions as a starting point for his initial virtual drawings. Modeling these visions in a 3D computer program, he creates multidimensional shapes and forms governed by consistent algorithms and often without any fixed sense of horizon. The shapes are then 'photographed' in space and captured from many different angles and repeated throughout his paintings like a clue or sensory cue. These forms are the clue to understanding Vasin's visual language. This language carries a message that is not transcribable into words, so his imagery becomes like a language that the viewer begins to learn on experiencing the work. As we become more familiar with his work, we begin to recognize certain forms, 'characters', or 'cues' that are repeated from different angles and perspectives. The imagery in his paintings is both culturally and socially evasive and therefore 'non-local', much like the mind, which is both everywhere and nowhere simultaneously.

Although conceptually esoteric on many levels, the work is also enjoyable on a purely formal level. Furthermore, sound is a key component of Vasin's work and plays an important role in the overall understanding of his language. He works on creating sound at the same time as he is working on his paintings and there is an obvious symbiotic connection between the two. His sounds are ominous and unsettling; other-worldly, vibrant and discordant with moments of peace and silence in between. In other words, they are strongly evocative of the worlds he creates in his paintings. There are elements of harmony and disharmony throughout his paintings which reflect the sounds he creates. They also illicit different emotions much like music, which has a pervasive effect on all sensory perception. In some paintings, the abstract shapes almost begin to take on fanfare forms, literally spilling sound from the canvas.

It is interesting to note that Vasin's paintings have such a powerful effect on sensory perception that they can be likened to the paintings of another famous Russian painter, Wassily Kandinsky, who was believed to be a Synaesthete. Synaesthesia is a neurological condition whereby when a person is stimulated by one sensory or cognitive pathway, they are lead to automatic, involuntary experiences in a second sensory or cognitive pathway. Therefore, sound can be experienced visually and vice versa. Kandinsky's paintings were known to create strong synaesthetic experiences. Vasin's paintings would undoudtedly have the same effect on an synaesthete, but also take the notion of 'seeing' sound to the next level. Sound is so prevalent in Vasin's work, that it may be possible to experience synaesthesia without possessing the acutal ability, as his forms literally embody the shapes and form of sound. If that is pushing the limit for the viewer, his sound performances undoubtedly create the experience for us which his paintings may or may not create on their own.

Vasin's art can be appreciated on a simply visual level, but nothing is simple in its rendering and the concept behind it. There is a conscious bridging of the gap between reality and non-locality. In many paintings, Vasin moves beyond abstraction and uses forms from our every-day world in a language that we easily recognize. Meaning is something which we learn though language and cultural appropriation. Vasin's world is one of pre-cognition, much like that of a baby. In Even If You Change Me, 2005, we see the realistic depiction of bones and gravel as the ground or base layer of the painting. The title reflects Vasin's ability to describe the world beyond familiar objects, where there is recognition of the human body and earth along with imagery that is beyond human recognition. The bones could be seen as symbolic of death and the changing of the human form at that time and the abstract forms are there to show us that aside from this undeniable reality, there exists a universal, non-local consciousness that lives on independently of death.

On the left panel of Even if You Change Me, we see black voids which echo the white voids on the right panel. The voids are interesting on many levels as they represent an empty space around which the energy, forms and sound can move. They could also be seen as a boundary. Beyond this boundary there is no sound, no space - only emptiness. These spaces are not part of Vasin's language but rather the boundaries within which his language can exist. Just as life can exist only under certain conditions, Vasin's language only exists within the boundaries created by him in his paintings. He strives to cross the boundaries of sensory perception, but also shows that creativity exists within space, boundaries and in the appropriate context. His visual cues and 'characters' stay within the boundaries of their language. For Vasin, this creates definition versus chaos. The black spaces in the painting imply a void which contains space; however the white spaces are just flat unpainted canvas, devoid of space or volume. Although they have an obvious relationship visually, they are also opposites. In line with Vasin's ubiquitous play on sensory perception, these comparative panels could imply parallel universes and the ability to see an object from many differing views and perspectives. These forms, while abstract and indescribable, also teeter precariously on what Vasin calls "the edge of recognition" or what we would consider definition or language.

There is the undeniable desire to entertain apparent in Vasin's technique. Through the use of multilayered styles ranging from pop-cartoonish renderings to realism and an almost watercolor-like subtlety and lightness in parts, the artist forces the viewer's eye to move around the canvas to uncover new and exciting areas. Even If You Change Me is a dense painting, packed with information and a bold color palette, including the use of interference pigments and holographic glitter. Always vibrant and reminiscent of a psychedelic experience, Vasin's work is loud and arresting.

Vasin has recently taken to painting self-portraits. Including himself as a character in his own visual language seems like a natural progression for the artist. The self-portraits are also connected to his sound performances. As always, the audio-visual experience is a synergistic one. Vasin views both his paintings and sound creations as "recordings". Just as he has repeated abstract visual forms and characters in his paintings in the past, he is now creating repetitive images of himself from different angles or parallel existences. Snippets of his performances painted before they even take place are one way of viewing his self portraits. The humorous side to painting oneself is not lost on Vasin. When asked about his recent foray into self-portraiture his quips, "Maybe you can see them as a pathologyIf you are a psychotherapist". Either way, they are all deeply personal and primal experiences with their own non-local way of communication. It seems clear that Vasin's way to express himself is through the unique and esoteric language of his sensory and mesmerizing art.